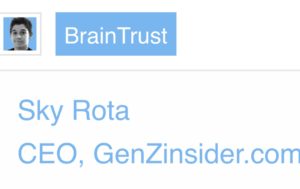 I’m finally a member of The Retail Wire BrainTrust Panel.

For people who don’t know the site, it’s about the retail industry.
They post like 3 big questions per day & you can choose to comment on them.

I have been a guest contributor for a while now as I have my own opinion from a generation Zers perspective.
I figured I would ask if I could be a member.
I had nothing to lose.
No idea what the difference was to be a member or guest writer.
The only difference I could see was the “BrainTrust” panelist have or should I say had( they recently updated their site)a gold box under their name.
Which made them look Smart & important!
The regular people had a box that said “guest”.
Now the “BrainTrust” box is blue & the “Guest” box is gray & only staff members get the “gold” box.

This is a part of the email I received after applying, it’s from Rick Moss, he is one of the founders of the site:

I’m one of the founders of RetailWire and I oversee content, including management of the BrainTrust panel.

Well, this is a first for RetailWire.
It’s not that we’ve ever had an age requirement for the BrainTrust. We look for people with deep knowledge of retail and a lot of hands-on experience working in the business so that naturally means people tend to qualify when they’re a bit older.

And really, I’m not sure you qualify based on those criteria, but in your comments on the site, you’ve proven that you can get people thinking about the Gen Z point-of-view. And you’re obviously quite serious about studying retailing and consumer dynamics. So, we’re happy to have you on the BrainTrust.”

Wow, what a compliment!
It won’t be the first time someone said I was the youngest to pitch them an idea or apply for something, but as you see, if you don’t ask or try you will never know.

I am never afraid of asking or trying or failing.

I will just move on & ask someone else but most times I don’t take no for an answer, I will be more persistent but never annoying.
I have nothing to lose by asking & now I am an official “BrainTrust” panelist.
Not to mention, I am the Youngest Ever BrainTrust panelist!
I’m 13 years old & I have the same title as the older professionals.
I am a professional in my generation.
I have a lot of great input & it’s good to hear from my generation about these different topics.

Thank you Rick.
Thank you for not judging me for my age.
Sometimes age is just a number.

I’m honored to be a “BrainTrust” Official Panelist.

I have a few ideas for their site as well, so I’ll be in contact with them..

This is a fantastic lesson in, if you don’t try you’ll never know.

I know I’m never giving up!