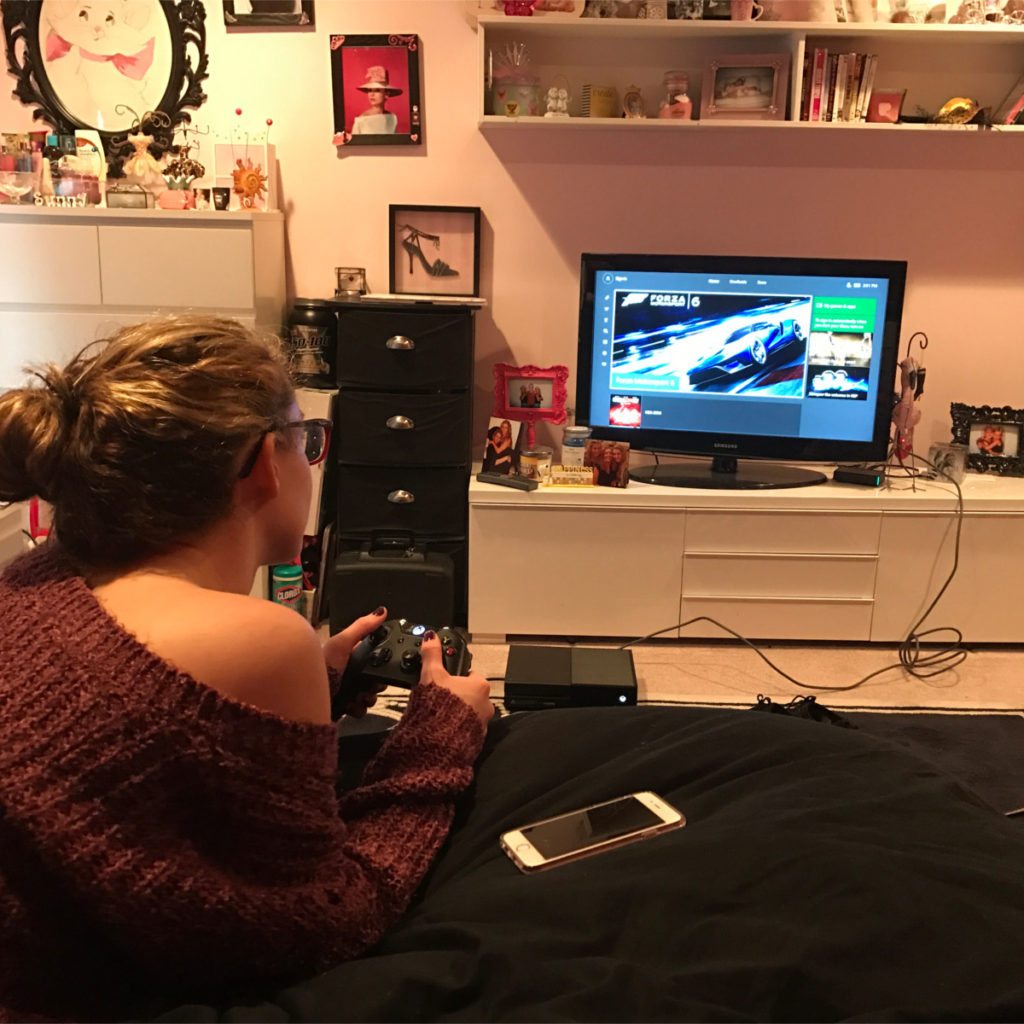 Did you know , “half of video gamers are women”

Both of my sisters play video games & they are Foo Foo Princess, girly girls who play, Call of Duty, Forza & a few others & love it.

My Mom & my Aunt played video games at home & in arcades.

My Aunt was the first “person”, not kid, not girl, boy or adult, to conquer PacMan in Philadelphia.

My mother remembers it well as the Tv crew did an article on her as no one knew what fruit came after each new screen.
My Aunt was a master gamer at my age (12).
People came from everywhere to watch her play and compete against her in South Philadelphia.
She competed against mostly boys because they were the ones coming out to play against her at that time.
My grandfather was all about treating girls as equally as boys.
He would bet any boy couldn’t beat my aunt at any video game.
My grandpop would let her compete against adults or anyone who was up for the challenge.
My Aunt was unstoppable & unbeatable.

My grandfather actually removed tables in the back of his restaurant in the 80’s because it was more profitable having kids play arcade games than order food.

Although he banned the good players like my Aunt from playing as he didn’t want someone playing one game for hours on only a “lousy quarter.”

Most kids were pretty stinky he said & just kept feeding the quarters into the machines. That was what the kids did back then. They got together, played & watched each other play arcade games.
There were no boy or girl games, just games everyone enjoyed.

My grandfather always bragged that, “No one could come close to how great my aunt played”.
‘She had a knack & perfect hand coordination”, my grandfather would say.
She could see the patterns. She was relaxed & was a good sport.
She had a great attitude & wasn’t competitive.
My Aunt played because she liked it, actually loved playing.

Guess what, she is a grown professional woman & still plays video games.
Not as much as she would like to, but I know if,
TheReverendBJ#! on Twitch TV and MissClicks, or EBizMBA Video Game Websites were available as careers back in her day, my Aunt would have jumped on the chance at becoming a professional gamer.

She would have been doing what she loved. My grandfather would have supported her in that choice, because he knew she was talented & a professional at it.  No different than any other sports figure.

So, I don’t get all the hate toward the woman gamers.  In my family history, women have always played games.

Why do people have to make it about gender?

I guess most people don’t know that 50% of the population of gamers are girls. Maybe girls hide that they play, but I don’t know why they would.

Both of my sisters have their own XBox in their dorm rooms & they don’t hide playing.

I recently did a YouTube interview with Morissa Schwartz & one of the questions I asked her was, “do you play video games?”
Yes, she has always played & still does. I wasn’t surprised with her answer.

I can tell you this, gaming is only getting bigger & bigger, so girls don’t give up. See the top female gamers on Youtube.

If anyone has anything to say to you, just ignore them. It’s their problem, not yours, maybe they can’t take the competition.

My advice to the marketing companies out there.

You don’t have to start making girl games.
Any games are fine.

And don’t forget to pay them the same as the men. Last time I Checked, they pay the same bills men do. It’s not like they get a discount, so if you start paying them equally, then others will begin to start seeing them as equals, you get it.

Oh, and they are prob much better than most guy gamers.

My sisters can kick some butt, so you better watch out for these girl gamers, they’ll come at you like a Spider Monkey!