Its not a debit or credit card & it’s not Bitcoin.
(No idea what bitcoin even is).

It’s Not money at all! 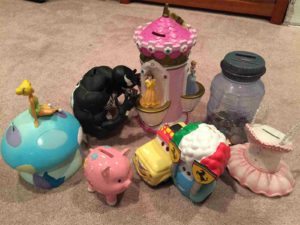 Us Gen Z’ers won’t really be needing these piggy banks in the future since we will be paying for everything with just out iPhones!

Generation Zers, don’t think about money. I mean tangible $ that is.
Maybe because most of us don’t use or see cash around.
Our parents mostly use bank cards, except for the old school men like my dad who Always has cash on him. Oh, & he also has a healthy piggy bank where he keeps loose change & small money.

Sadly, we don’t keep track of money the way our parents say they did. My mom says she had a little book that she wrote deposits in & withdrawals etc.
Well, all I see her do now is look up her accounts on her cell.
My brother & sisters do the same thing.
My brother tells my mom he can transfer money from her account to his PayPal account.
This scares the crap outta my mom.
She is like, What??
NO, WAY!!
I’ll send it through Western Union.
She is still scared about the whole money, cell phone thing.

My brothers & sisters get monthly money deposited into their checking accounts while away at college. They always run out before the end of the month, every month. I don’t think it’s all about mismanagement of their money.
I think it’s because they don’t ever see their money. They just swipe for everything & the money goes fast.

People today get their pays direct deposited & never see any money.
They pay their bills online, they get all their monthly subscriptions like Netflix automatically took out. They get charged for their kid’s activities like piano lessons & acting lessons taken out as well. They shop online & order takeout online.
And then they get an email from the bank online saying insufficient funds, (Like my brother).
And they are in shock & wonder, where did all my money go??

Who is guilty of renting a movie or purchasing something from iTunes at least once a month?

I was guilty, now I’m blocked!

I was making in-app purchases & renting movies on my own until my Mother gave me the invisible credit card theft talk! Then blocked me from future purchases.

I hate to be the one to tell you this, Mom & Dad the money thing is about to change again & permanently!

I can just picture my parent’s faces.
“Pay for everything from your phone?!”

Especially my dad, he just started using the ATM’s to get money out. lol
He’s gonna be in shock especially because he doesn’t carry a cell phone! At least most of the time.
Even his business journal people are trying to give him a heads up.
“Paying for things is going in a new direction, everything will be paid for through apps on your cell”.

Hopefully, we all have our phones charged!

The generation Zers are just fine with this. If we only have to carry one thing, that would be fantastic.

We can’t remember to carry more than that anyway! Lol

We trust this digital world we were born into & have No problem doing everything straight from our cell phones. Oh, including car registration & insurance cards on our cell as well, just in case you get pulled over & like my mom had to go through her glove compartment in her car that had 10 expired insurance papers in there. Ugg!

Thankfully she found the updated one. Lol
but she still got a ticket.
(Different story!)

One question, what are they going to do with all those unused piggy banks?