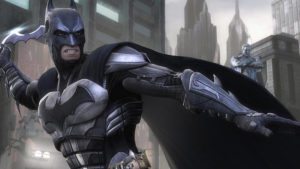 Even though Injustice is not a new game, I thought that since injustice 2 is coming out

I should write about it.

Injustice is an alternate universe of the DC Universe.

The story is; Joker captures Lois Lane & Superman goes after the Joker.

Joker drugs Superman which makes Superman kill Lois Lane, which sets off a nuke in Metropolis.

Superheroes are split when Superman wants to make order, but not in the best way.

Batman doesn’t want Superman to go crazy and tries to stop him.

Superman goes to Joker, puts his hand through Jokers chest and kills him.

A comic series comes out explaining the next 5 years where a lot of superheros and villains die.

The video game takes place after the 5 years.

Batman and Lex Luthor find a way to bring people from a better universe, and there is still just good vs evil and the good guys aren’t split.

They get Superman from that Universe to stop Superman and they imprison him.

There is a version for mobile devices, but its not the same game exactly.

In the console version all the characters are evenly powerful.

But in the mobile device there are certain people who are more powerful then other people.

Also in the console version there is much more content and a actual story.

In the mobile version your just fighting without a story.

In my opinion, if you’re going to get Injustice get the console version.

The game is fun to play, but the story is pretty short.

You can play with your friend in the game if you have to controllers.

This review is only about the console version.

In the game, you can use the environment around you to your advantage.

Example: You can break a fish tank and have it fall on someone.

This is an overall fun game.

The game is rated T for teen for mild language and violence, but it really isn’t to inappropriate in my opinion.

The other section of the game is selecting a character.

There are many heroes and villains you can fight, depending on what character you’re best with.

The character I’m best with, is Death-Stroke.

Well, Injustice is about $20 dollars these days.

The sad thing about Injustice 2 standard edition, it is $60 dollars right now.

The Ultimate Edition for Injustice 2 is $100 dollars.

Also, Injustice 2 will only be for Xbox 1 and PS4.

I’m also excited about having more characters in Injustice 2.