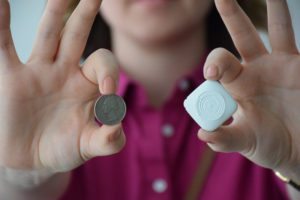 They claim it to be the best GPs tracker… Better than their competitors; like Tile and Trax. But is it just too good to be true?… Well, let’s find out.

To start the Ping is a GPS tracker being funded on IndieGoGo at the time of writing and has raised over $857,000 from 5000 backers. And that number is rapidly increasing. The idea is that you attach it to your things like your drone and even your kids. Then you can track them anywhere in the world from their app on your phone.

The ping is rechargeable and they claim it has a 3-month battery. It also has an SOS button that when you press it is will notify someone’s phone, watch, etc. Also, it has another button they call a “Ping in Button” that will do the same just with a nice message. The ping uses data to find your belongings and it comes with one year on them. But, after that the bill is about $36 a year, also if you want all 157 countries it is an extra 10 dollars. And lastly, it is also waterproof up to 10 meters.

Now do I think it is worth it… yes and no. If you have something that means a lot to you that totally do it. I mean for instance sky might want to put one on all his stuffed animals he loves so much… :). But I think it is too expensive to just put on anything.

So in the end, this is crazy!!! But what I think will happen is over time they will start giving up on their promises. But it seems like they know what they are doing and they already have all it worked out on the Indiegogo page. Well, time will tell because estimated date you will get it is July 2017.